Yes, I’m still here and keeping track of some interesting stories for you. I have been doing a bit more flying lately and, coupled with an influx of clients for my website design business, have been a bit busy lately.

I made it to a fun Swift gathering in Oregon a couple of weeks ago and this past weekend made a nice fly-in in Northern California. I’ll get articles out about both of them as soon as I can.

Enjoy – and fly safe.  Remember, it’s an election year. Check those NOTAMS for pop-up TFRs as the candidates move about the country trying to convince you to vote for them. 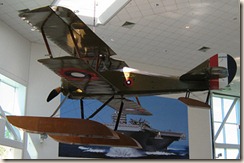 Thomas-Morse Scout at the Naval Aviation Museum in Pensacola.

Forty-Seven Years In Aviation: A Memoir; Chapter 15: A Year In Korea, Then Back To OSU
From AvWeb again. This is Chapter 15 of Richard Taylor’s memoirs.

American Airlines mechanic celebrates completing 70 years on the job.
This is from the NY Times. Al Blackman, now 86 years old, has worked as a mechanic for American Airlines for 70 years.  He was recently treated to a celebratory airplane ride – but not in any old airplane over a nondescript landscape…

Michael Porter’s restored Stearman helps tell the women’s story
This is from General Aviation News. Michael Porter restored a 1942 Stearman biplane and in doing so found that it had been one of the training aircraft at Sweetwater, TX Avenger Field – the training base of the Women’s Air Force Service Pilots (WASP). He took it to the Sun ‘n Fun gathering this year and reunited it with some of the WASP pilots.

Flying Magazine’s Top 100 Airplanes
This, obviously is from Flying magazine. I include it just in case you have been in a cave and haven’t seen it yet. A notable list of Flying’s authors and editors got together and came up with their list of the top 100 airplanes of all time. It’s an interesting list and each aircraft on the list has a short paragraph by one of the panelists about why the plane was included.

Last A-4 restored for Flying Leatherneck Aviation Museum
This is from DVIDS (by going to the link you can find out what that means). Bob Butcher flew the A-4D Skyhawk as a young lieutenant. Nothing brings to light how much time has passed than to watch one of the planes you flew be inducted into an aviation museum…

Ithaca, NY Aviation History
This is from the Ithaca [NY] Journal. There is a long history of aviation in Ithaca, though people rarely think about it. The Thomas brothers were from Ithaca – builders of the Thomas-Morse Scout, a single-seat biplane used as an advanced trainer in WWI…

A first-hand account of the Hindenburg disaster
This is another from The Daily Progress of Charlottesville, VA. Frank Ward was a teenager in 1936 and had skipped track practice to help his father as a member of the ground crew at Lakehurst Naval Air Station…
As an aside. My late uncle, fluent in Spanish, for several years worked for La Prensa, a Spanish newspaper. He had been assigned to cover the Hindenburg arrival and he, too, was there to see the event unfold. He was also at Le Bourget Field in Paris for Lindberg’s landing.