There seems to be a real hit-and-miss thing going on with aviation writers lately. Only one link to pass along this week.

Also, no flying for me this week either. The Swift annual is still only partially completed and was due the end of last month. No estimate on the completion time – I’m not good at working in an unheated hangar in temperatures below 40 deg (F).  Yeah, I’m a wimp…

Perry Sisson, the individual who set up the “World Domination – the Day of the Swift” effort has published his tabulation of the day’s flying. It has also been covered in several aviation publications recently. The bottom line is that 102 Swifts went flying that day  from 4 countries (USA< Canada, Brazil & France) and, after correlating time zones he determined that 33 were in the air at the same time and a total of over 136 Swift hours were flown that day.  It was a great effort by all involved – there is already talk of trying to better the result with another event.

I was going to publish a separate post (a couple of months ago) on my time at the West Coast Swift Fly-in – I’ll add it to the bottom of this post to add a little more to this effort. Enjoy.

Pilot celebrates 100th birthday at controls of his airplane
This is from The Journal in Martinsburg, WV. Thomas Reynolds took his first airplane flight in a Ford Trimotor in 1929. It sounds like he has been involved in aviation one way or another ever since. He recently celebrated his 100th birthday by going flying in his Evektor SportStar. He always flies with a copilot now, but he is the pilot in command and does all of the flying himself. We should all be so lucky…

This year’s West Coast Swift Fly-in was, once again, held at the Jackson-Amador County Airport (KJAQ) in Northern California. It is a nice 1-hour flight for me from Reno up over Donner Pass, down I-80 to near Auburn, CA and then south along the Sierras to Jackson.

The fly-in has traditionally been held the week after the Reno Air Races, but this year was moved to the week before the Races in an effort to have better weather for those Swift owners on the east side of the mountains. It turns out that few of them took advantage of the change, electing instead to attend a fly-in located in South Carolina.

Twenty-four Swifts made it to Jackson this year. There was everything from an original 85-HP Swift to the latest restoration out of The Aeroplane Factory with an Aspen Avionics glass panel run by dual Garmin 430s.

The fly-in was a great time to catch up with old friends and make new friends. I was one of the ‘early bird’ arrivals, flying to Jackson on Thursday and arriving at about noon. Even so, I was the third Swift on the field.

By moving the event to “the week before the Reno Races” the organizers were helping all the east-coast Swifters, but it made things a bit more complicated for me. The Swift event was held September 6-9 and the ‘official ‘ dates of the Reno Air Races are September 12-16. However, if you have been involved with a major event like the Races, you know that things start happening well before the event dates. I’ve mentioned here before that the Stead Airport starts transforming into Race status a month before the event dates.

I left for the Swift Fly-in on the morning of the 6th, just prior to the Stead control tower went into operation (at noon on the 6th). All of the race planes and crews had to be at Stead this year by Saturday the 8th. Sunday, the day I returned from the Swift event, was a practice day – meaning that the race course was active, Race Control was controlling the airfield and a TFR was in effect around the airport. The Air Race Association each year publishes procedures which can allow a Stead tenant to fly into or out of the airport before official racing begins. I submitted my request and was given a slot time on Sunday to return to Stead and a PPR number to provide the controller upon contact. [Prior Permission Required].

I made my slot time and landed with no problems or delays. Then I was faced with the establishment of the ‘NO PROP’ line in effect. Our hangar is in the unlimited pit area, so I taxied in just like one of the racers, shut down where they normally do, exited the aircraft and chocked the wheels.  My wife met me with our golf cart which is fitted with an aircraft tow bar that grabs the tailwheel. We hooked everything up and towed the Swift backward through the pits and down the hangar row.  Fun times were had by all…

Here are some photos of the Swift event: 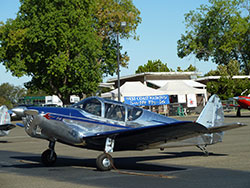 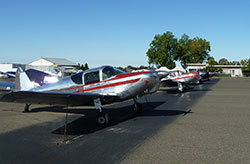 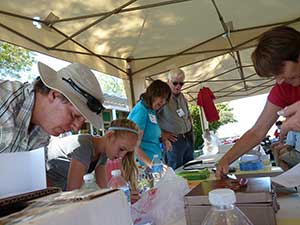 Action in the registration area. 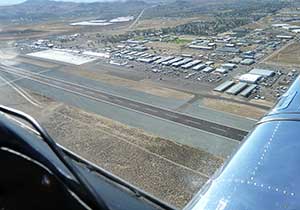 Returning to Stead after the Fly-in. Reno Air Races in progress.