Another week without flying. If the thunderstorms weren’t building the smoke was thick in the valley – sometimes both were present. We have been in a cycle of storm days this week. They usually start to our south and move through the area.  Not something I mess with in the mountains.  I have a friend who lives in the town to the NW of here where I like to fly for breakfast. There is a huge fire in the mountains near there and he says the visibility has been less than 1/2 mi in smoke. If you take a look at ForeFlight or some other means of checking a graphical representation of TFRs you can see them all over northern NV. They are established for firefighting operations. The weather is supposed to stabilize by mid-week with temperatures closer to our norm for this time of year – around 90 for a high. 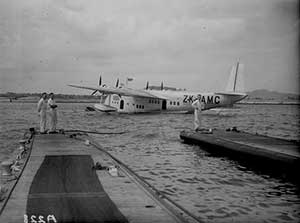 Here are some articles you may have missed this week:

The Days of Flying Boats
A link from Seattle PI brought me to this blog. There is a very good piece about the ‘Romantic Days of Flying Boats’ as well as lots of other historical aviation information. You’ll be able to spend a considerable amount of time on this link.

Musings of an Island Bush Pilot
This is from Maine’s The Working Waterfront. The article is a look into a day in the life of a Maine bush pilot by the name of Ted Westlake. An interesting read.

Recollections from a lifelong love of aviation
This is from the Press-Enterprise in Riverside, CA. Mary Magalee is now 93 years old and living in a retirement village in Southern California. One day when she was 3 years old and living in Baldwin City, KS her grandmother called her outside to see a biplane that was flying by. “I saw a little speck in the sky,” Magalee recalled. “It was bright red. I thought I would like to be up there.” And that’s how it started…

Curtiss Model E to fly again
This is from the Leader.com in Corning, NY. Some of the volunteers working at the Glenn H Curtiss Museum have been busy this summer restoring the museum’s replica Model E flying boat. They plan to fly it from Keuka Lake on September 15th, the centennial anniversary of it’s first flight.