It seems that another group is attempting to make a film about the Reno Air Races. This one will be an IMAX movie, titled Air Racers, Forces of Flight 3D is supposed to be released in September of this year – hmmm, same time as the races. It would be great to premier it here in Reno during the races, but Reno doesn’t, to my knowledge, have an IMAX theater.

The attempt at a movie about the Races was Thunder Over Reno. I won’t say it was bad, but I got up and walked out – and I was watching a DVD on my computer…

Here are some photos and a couple of film clips from the week’s activities. 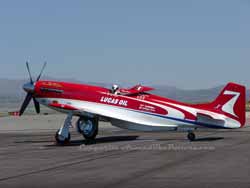 There were a few Reno racers at the airport for the filming and an air show act of three. This is “Strega”, the unlimited champion for the past three years. 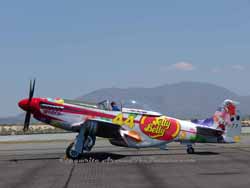 This is the “Jelly Belly” Reno Air Racer. It’s pretty obvious who their sponsor is. The ‘every day’ name of the plane is “Sparky,” an off-handed reference to previous problems with landing gear extension. 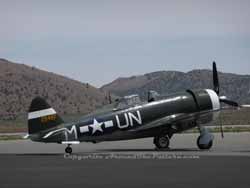 This bad boy stopped in earlier in the week for fuel. I didn’t get a chance to talk to the pilot.

Hearing a big-throated radial in the pattern is a nice diversion from whatever you happen to be doing in the hangar.

This first video clip is of some Jet Car maneuvers on the ramp. It looks like they were deliberately trying to blink the camera on the boom with smoke from the car in some case and to look directly into the flame plume in others.

This clip shows some minor action on the ramp as the pilots exit their planes. The pilot in the Jelly Belly is Brandt Seghetti and the one in Strega is Steve Hinton, Jr. – with his father handling the chock duties.