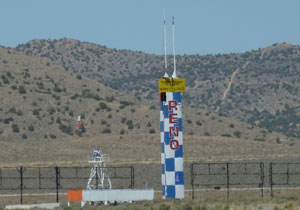 The Home Pylon is up!

Still no Swift flying this week. By the time I felt well enough to get back into the air the 2012 Pylon Racing School had started.

Stead Airport tenants can go flying during the week of PRS, but the process is not an easy one. To start, my hangar is in the area of the airport that must comply with the ‘no prop’ line. In order for me to depart (or return) between 7 am and 5 pm I would have to tow the plane out to the edge of the ramp before starting the engine. Departing before 7 am or returning (well) after 5 pm may alleviate that requirement, but I have not seen anyone pressing the issue.

While the race course is active you must contact race control to move on the airport. There are 4 or 5 15-minute periods built into the race schedule for tenant arrivals and departures. However, these periods are described as not ‘hard times,’ meaning that if the training is behind schedule a particular period may be deleted. You would only find this out when you called in to race control for taxi or landing instructions.

For my ‘fun flying’ it just isn’t worth jumping through all the hoops. Today (Saturday) is the final day of training, so airport operations will be back to normal tomorrow – except for all the race plane departures.

Pylons four, five, six, seven and eight will be moved 150 feet north, away from grandstands for every race class except Formula One and biplanes

So that appears to be what I was seeing. One notable item for this year’s PRS is that there were no unlimited aircraft entered. Dreadnought was here and ran the new course a couple of times as a test, but did not fly otherwise.

A look at the Evergreen Aviation & Space Museum

This is from Herald Net. The Evergreen Aviation & Space Museum in McMinnville, OR has a little bit for everybody, but especially for aviation buffs. It is the home of the Howard Hughes ‘Spruce Goose’, has a 3-D movie theater and includes a water park that has water slides coming out of the aft emergency doors of a Bowing 747 that is perched on top of the museum. Check out the photos included in the article.

this is found on the AvWeb site. I have included links to Richard Taylor’s memoirs several times in the past. This is a link to chapter 14, describing his time at Ohio State University and his introduction to single-engine jet flying. as usual, worth the read.