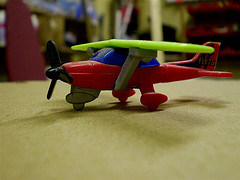 What type are you?

"I fly because it releases my mind from the tyranny of petty things..."