It was one of those really nice Fall days in Reno, partly cloudy skies, light winds and temperatures in the low 70s (F).  One of those days when you just have to go out to the airport and go flying. So, I drove out to Stead (4SD), ran through a preflight inspection, pulled the Swift out of the hangar and fired it up. I hadn’t had much to eat before I drove out to the airport, so I decided to fly over to Quincy, CA (2O1) for breakfast. It’s a nice leisurely half-hour flight to the west of Stead, down a wooded valley. The runway (06-24) is pretty much a one-way runway, though it’s not designated as such. Unless the winds are strong from the east everyone lands on 24 and takes off on 06. There are hills or mountains on both sides of the airport’s valley and there is another solitary hill just off the east end of the runway a bit south of the centerline. There was only one other airplane in the area, a training flight from the Quincy flight school, When I made my radio call entering the airport area they responded with their position and said they would remain clear of the area until I had landed. (I didn’t think my flying reputation had made it that far!) I could see them circling to the NW of the airport.  I made a reasonable landing, found a parking spot, chocked and closed up the plane and headed for town. It’s a nice 10-minute walk to the Morning Thunder Cafe in town where they have an outstanding selection of breakfast options. I highly recommend the experience.

The flight back to Stead was smooth and uneventful, continuing my impression of the day. I entered the pattern at Stead, landed on runway 26 and turned off at the mid-field exit, aiming at the center of the Air Race’s set of permanent grandstands. And there half way between my taxiway and the grandstands sat a V-22 Osprey. I had never seen one in person, so when I had safely put the Swift back in my hangar, I grabbed my camera and headed out to the ramp. By that time I could hear the Osprey starting up. 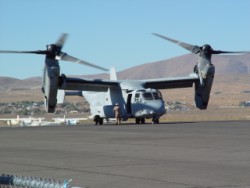 There was a crew member on a headset with a long cord standing outside the plane, probably responding to checks being done by the flight crew as part of the predeparture process. Eventually the crew member got on board and pulled up the stairs. Then the power came up a little and the engines tilted a bit forward and the Osprey made it’s way to the runway. No, they didn’t bother to go to the far end. They used a taxiway about 1500′ before the end and were airborne way before midfield. I guess that’s the whole point, huh? For a while we lost sight of the Osprey in the cloud of dust they were raising on the taxiway perpendicular to the runway. The wing span plus prop diameter was easily wider than the width of the taxiway. I was really surprised at just how large a plane it is. I guess the videos I had seen of the Osprey didn’t really do it justice.

Apparently they had stopped at Stead because of some minor maintenance problem and were able to fix it themselves. 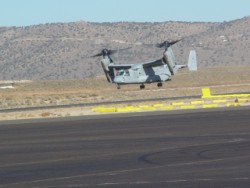 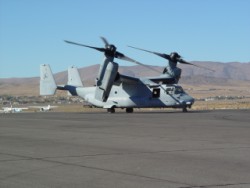 They flew straight out from runway 26 and by about 3 miles from the runway were in full “airplane mode.”  The flew around the area for a while, then made a low and slow pass down the runway with the gear down and the engines tilted up followed by another departure. They were gone long enough for me to get back to my hangar, then I heard them approaching the airport again. I got outside with enough time to see them make a pass down the runway west-to-east in airplane mode.  Impressive.

That excitement over, I went back into my hangar and started in on a little preventative maintenance on the Swift. I was making a little progress on my to-do list when I heard a loud jet roar outside. OK, now what? I grabbed my camera and headed for the ramp area near my hangar row. Turns out all the noise was being generated by our resident Mig-21 in the pattern for a little practice. Just what you want to hear entering on a 45 to downwind behind you, huh? I watched for a while and then tried a photo as it made it’s full stop landing and popped the drag chute. Unfortunately I was on the opposite side of the airport and a 10X zoom didn’t really meet the challenge. A little while later I got in my truck and drove down to the other end of the ramp and got a photo of the flight/maintenance crew around the plane. 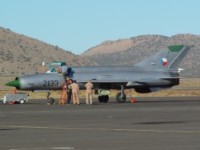 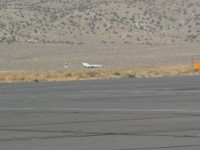 I watched them out practicing one day earlier in the year when they must have made 4 flights, spending almost the entire time in the pattern. Probably an individual getting his competency letter for the plane, though I’m not sure how many of them are flying around the U.S. I do know that there’s no way I would have wanted to pay for the gas for that day. And that was before the big price spike!

With the show over, I headed back to work in the hangar. But that didn’t last long, as another distinctive sound pulled me to the ramp once again. I live in the southern part of Reno, west of the departure path for the commercial airport, but close enough to hear and watch the planes as they climb out toward their destinations. There is a company in town, IGT (International Game Technology), that runs a corporate shuttle between Reno and Las Vegas. They have two Piaggio Avanti aircraft that make the run fairly frequently. The Avanti is a twin pusher turboprop with a canard configuration. It has a very distinctive whine to it when you hear it fly. That was the whine that I heard from my hangar. Since I had never seen one of the IGT planes at Stead, I was curious to see what brought them over from the commercial airport. That’s why I got into my truck and drove to the other end of the ramp. The Avanti had landed and disappeared from view somewhere near the fuel island. 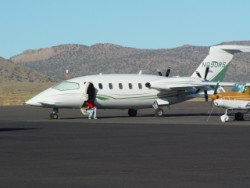 It turns out that it wasn’t an IGT plane after all. The FAA records show that it’s registered to Rainbow Sandals Retail in Las Vegas. I caught this picture of the pilot filling out paperwork while he sat on the airstair. Obviously fun times. The Avanti remained overnight and left at about noon the next day for parts unknown.

So that was my interesting day at the airport. Beautiful weather, a nice flight to a great breakfast, a little work in the hangar and a view of a wide range of unusual airplanes. Could an aviation nut ask for more?

A Conversation with MEL