As I mentioned in the auto museum article I accompanied some friends to the Goodguys 25th West Coast Nationals Hot Rod Show while my propeller was out getting new seals installed. I enjoy looking at nicely restored or modified cars, but I’m an airplane guy at heart.  So, whenever I found something that was even remotely aviation-related I took a picture of it.

The entrance to the show first took spectators through the flea-market area. Just like AirVenture the place was filled with parts vendors and people selling restoration projects. 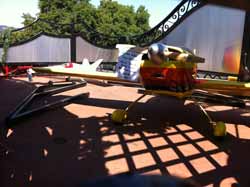 There was a partially restored truck at one end of a row with an enclosed flat bed that held my first aviation discovery…  These RC models were for sale. The one on the right seems a bit expensive, but I’ve never had an RC model so I really don’t know. I’ve never been able to justify spending money on a model when I have a full-size version to try and keep in the air.

Almost any flea-market operation will have at least one vendor who is selling old (or new) metal signs of one sort or another. 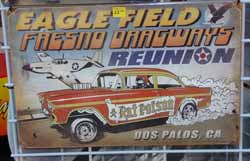 There were several from airlines now long gone and quite a few with warbirds on them. I’m always tempted to get one or more, but manage to resist the temptation (see spending money above) – I already have several on the wall around the hangar.

Concurrent with the hot rod show was a gathering of people who build or collect miniature engines – gas, electric and steam – that are true to design and fully operational. The displays occupied one of the buildings on the fairgrounds where the auto show was being held.

This is a working model of a 1917 Bentley Rotary engine. Unfortunately I was never around when they demonstrated it running. 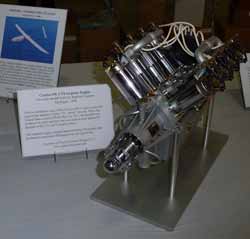 This is a working model of a 1917 Curtiss OX-5 aircraft engine. 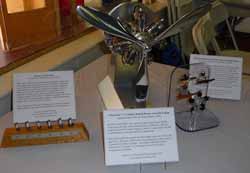 This is a working model of a 7-cylinder radial aircraft engine. Smaller single-cylinder engines are on a small display stand to the right and a set of really small spark plugs is on a stand to the left. 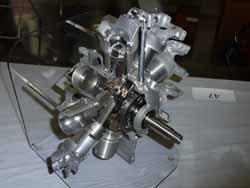 This is another radial aircraft engine, this time with cutaway cylinders and case to show the inner workings. So that’s how it works!

OK, this is stretching the aviation bit a  little –  it is a 1941 Western Flyer. I really like the ‘rudder’ off the top rear of the body.  It’s probably dangerous to drive, though. Everybody you passed would feel that strong urge to take a photo and text it or post it to Facebook while they were driving. 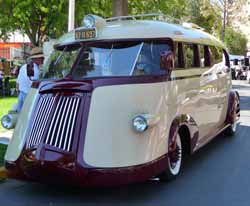 This is the view from the front. From this angle it looks like they wanted it to look like the front of a train.

It was for sale. Unfortunately the interior was pretty much bare. Guess they blew their budget restoring the outside. 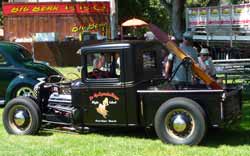 Much closer to airplanes again – this hot rod truck was restored to a vehicle used by a flight school. It even has a wooden propeller on a stand in the bed. 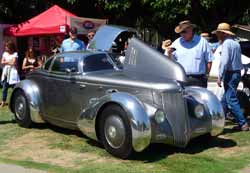 Steve Moal and his sons, Michael and David, are carrying on the work of Steve’s grandfather and father in the area of coach building. He is known to have something new and off the wall each year at the Hot Rod Show. This year it was this aluminum-body speedster. 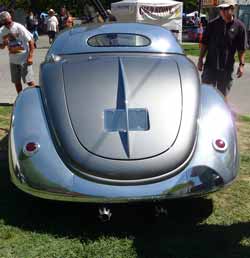 The aluminum body is hand-formed. The fenders were made in multiple pieces, welded together and then hammered and formed to the point that the seams were no longer visible. You can see a row of perfectly formed rivets around the bottom of the body. Their website is at Moal Coachbuilders. 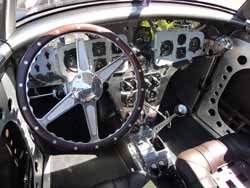 This is a look at the ‘cockpit.’ It looks like he bought a wrecked airplane and took all the instruments out of the panel. Off to the right you can see the altimeter. The oil pressure and temperature gauges look pure airplane as do most of the switches and other gauges.

For those of you who are car as well as airplane fanatics I’ll include photos of some cars the caught my eye. The workmanship is outstanding. I’m sure that any one of the builders/restorers could complete and award-winning aircraft. 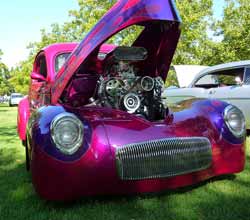 I couldn’t pass this up – like putting a Merlin into a C-172 – only fewer problems with the c.g. 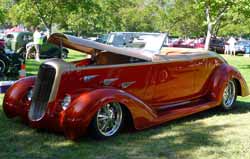 Beautiful paint, beautiful interior. Great body work. I can’t imagine taking this out on the road. 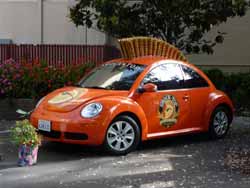