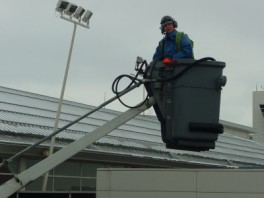 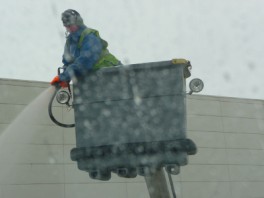 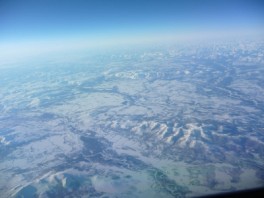 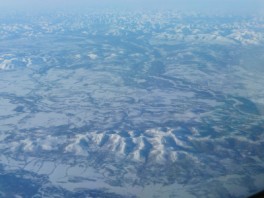 You can see from these photos of eastern Russia that there is not a whole lot there in the way of civilization. We flew for hours without seeing anything that looked like a city, town or road. 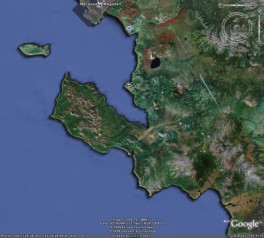 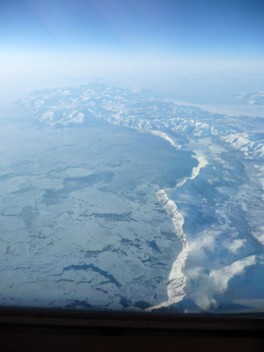 Our flight manual says to consider this part of Russia to be equivalent to the ocean as far as emergency services are concerned. The Russian air traffic controllers had us in radar contact, were easy to understand, friendly and usually cleared us to the far end of their sector rather than requiring reports at each navigation point. It wasn’t until we got almost to the Sea of Okhotsk that we saw any cities.

This flight was a little unusual in that we had plenty of clear weather over Russia, but found overcast skies when we arrived in Japan. In my experiences we rarely get a clear view of the Russian landscape. 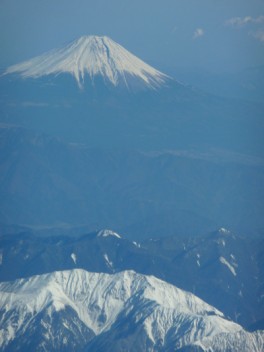 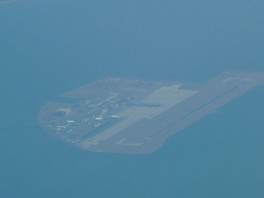 On they way to our next destination, however, the clouds had moved off and we were given a really nice view of Japan’s Mount Fuji. This view is taken as we flew west to east. It’s hard not to take a few photos of the mountain as you go by, no matter how many you already have taken. Digital photos came around just at the right time or I would have several shoeboxes full of paper photos by now.

Everyone is probably familiar with Japan’s Osaka Kansai airport, built on a man-made island in Osaka Bay. It has often been featured on the National Geographic television channel. You can see it easily in Google Earth, though their view of it shows a partially completed second runway, while that runway has been in operation for a couple of years. The Wikipedia entry has what appears to be an up-to-date photo of Kansai. Japan has another island runway, called Chubu Centrair, or the Central Japan International Airport, or it’s more familiar name, Nagoya Airport. It also is easily viewed in Google Earth, but I took a hazy photo of it as we flew by anyway. Viewing the larger version of the photo will allow you to see the bridge to the mainland in the lower left of the photo. I’ll be heading to Nagoya on my next trip.

Quite often on my trips I see aircraft from airlines that I haven’t seen often or I think I might get a unique shot of one that I’ve seen before. These are just a few from that category.

These four photos were taken as we were departing from the Osaka Kansai airport. The first photo is of the aircraft that was parked at the gate next to us. I had never seen an aircraft from Uzbekistan Airlines, so I had to take a quick photo of their 757 as we left the gate. The next photo is a shot of a Shanghai Airlines Boeing 737 that was asked to wait as we taxiied by on the parallel. I had seen a few of their larger aircraft, but this was the first 737 that I had seen at Osaka. The next shows a Eva Air triple seven just touching down, the main gear stradeling the runway centerline. It gives a good view of the trailing edge flap deployment. At the wing tips you can see the leading edge devices sticking out just below the ailerons. The last of the Osaka shots is of an Air China Airbus A-330 just lifting off from Kansai. The larger version clearly shows the gull-wing shape of wing-to-fuselage fairing at the trailing edge. 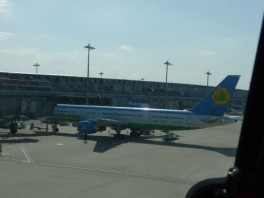 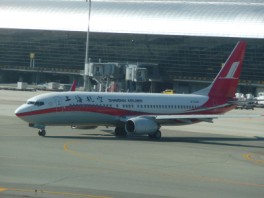 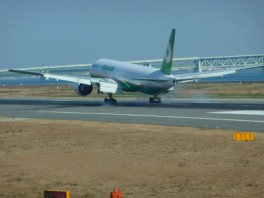 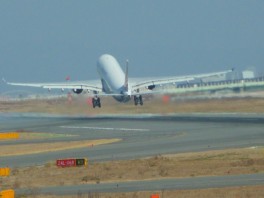 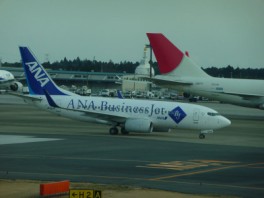 Now we shift to Tokyo’s international airport in Narita, Japan. As we were departing I took a couple of shots of the large ramp area near the south end of runway 16-34. I was not aware that ANA (All Nippon Airways) had a business jet operation but after looking at the ANA Wikipedia entry, I found this:

ANA planned to launch ANA Business Jet on 25 March 2007 as an extension of its business class offering, using Boeing 737-700ER aircraft configured with 48 seats in two classes. The two aircraft would initially be used on daily services between Nagoya and Guangzhou.[15] Additionally, ANA will also use this jet to fly between Tokyo and Mumbai, in a configuration utilizing 38 seats. 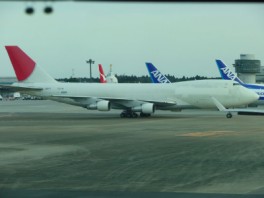 The Boeing 747-200 in disguise is, from the paint on the tail, one of the latest planes that JAL (Japan Airlines) is retiring. I’m sure it’s not the first that they have retired and with this world economy it will certainly not be the last. 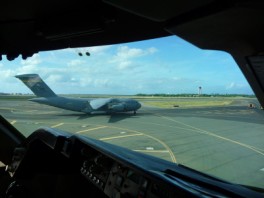 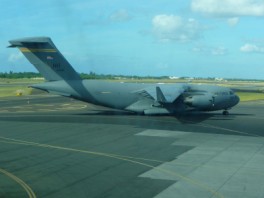 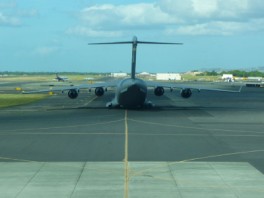 These last three photos are for the military fans out there. The aircraft parking ramp at Hickam Air Force Base connects directly to the Honolulu International Airport, making the airport a joint-use facility. The military aircraft that you see at Hickam as you taxi for departure is a combination of fighter and transport with F-15s, F-16s and A-10s visible as well as a ramp usually full of C-17s and occasionally KC-10s, KC-135s and C-5s. On our departure this day a C-17 must have landed as we began our push-back for departure. It is a long push by airline standards and, this time, placed us on a taxiway at the edge of the parking apron that transitions to the runway’s parallel taxiway leading to the Hickam ramp. When we called for taxi clearance we were told to hold for traffic passing us on the left and transitioning to our taxiway. The traffic was the C-17 that had just landed, so I took a few photos as it went by. As you can see, the top of the wing is clearly visible from the height of the 747 cockpit.

I realize that this has been a long post, but I thought you might like to see some of the photos that I found stored in the camera I take on my trips.