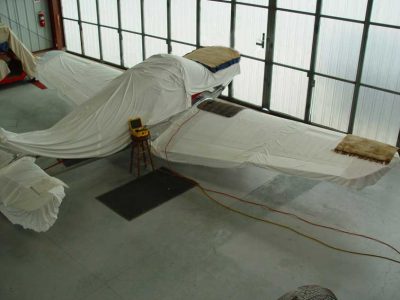 Yes, there is something missing.

I just looked at my logbook today (yes, I still log every flight that I make) and was really disappointed at what I found. The last time I wrote an article here I described a flight I had in June to take part in Swift World Domination Day.

Believe it or not, that was the last time I flew my Swift. I knew it had been a while but I had no idea it was going on 6 months. I flew a couple of times in August in a friend’s Piper PA-28-180 and I got about a half hour in the EAA Ford Trimotor (see below) but there is nothing else noted in my logbook.  Pretty sad.

That isn’t to say that I have not been involved in aviation – I just haven’t been up in the air.

In January of this year I was elected as president of the Reno-Stead EAA Chapter (Chapter 1361). Taking care of those duties has taken a lot more time than I anticipated. The Chapter has made tremendous progress in growth and visibility during the year under the guidance of our new officers and board but the progress has come with a large time commitment. With help from the chapter members I expect my work load to ease a bit.

In July I drove back to Oshkosh and experienced AirVenture for the first time in about 30 years. It was the same and it was different. I’ll write an article about that soon.

In August I started on the annual inspection on the Swift. I took my time and was considering replacing the instrument panel in the process while making room for some sort of ADS-B installation. I looked the prop over then decided to take it to a shop in the SF Bay area to have it inspected. While the flight time on the prop was minimal, it had been 16 years since it installed on the plane. I ended up telling the shop to overhaul the prop. That process is still ongoing.  The length of time that the overhaul is taking is not a function of the ability or professionalism of the prop shop, it is merely a result of the need to come up with an unexpected amount of funds to pay for the overhaul. I should have it back on the Swift in December – assuming I can get back and forth over the Sierras during a winter weather break.

In September the EAA Chapter provided volunteers to operate the people-mover shuttles during the National Championship Air Races. I’ll just say that it was an unexpected and very tiring experience trying to keep all the volunteers going in the right direction.

During the Air Races our EAA Chapter received an offer from EAA to host their Ford Trimotor Tour at our home airport. I polled the members of the Board about their feelings toward the event and then gave EAA a thumbs-up for a stop in November. So as soon as we had cleaned up everything from the Air Races we began getting ready for the Trimotor. That seems like a long time between events, but the Chapter had never hosted that type of event, had no history of local area public relations and needed to start the process of obtaining a use permit for the event from the Reno-Tahoe Airport Authority. It was a true learning experience on all sorts of levels.

Back in November of last year (2015) the IMC-Club and EAA merged their efforts forming EAA IMC LLC, a subsidiary of EAA, Inc.,  to distribute IMC Club materials to any EAA Chapter that wants to establish a Club as part of their chapter. IMC Club is a guided discussion group of real-life IFR scenarios. The Scenarios are submitted by IMC Club members, massaged into an audiovisual presentation and provided to Club coordinators as discussion topics. Our EAA Chapter decided to form an IMC Club as a way to attract new Chapter members and to promote that EAA is not just about building airplanes. I took the club Coordinator training, found a meeting location and promoted the inaugural meeting.  We had ten people show up for the inaugural meeting, two joined our EAA chapter after the event and three more established Trial EAA memberships.

The Trimotor event went off in November as though we had been doing it for years. The weather was absolutely perfect for the entire 4 days – clear and winds no more than 10 knots. Rare for any time of year in Reno. The plane left for it’s next stop on Monday and Tuesday a front came through Reno with wind gusts to 60 kts., low ceilings and rain.  The Trimotor was a fun event, provided the airport users with another look at the activity of the EAA Chapter and brought in a few dollars for the Chapter (the hosting chapter shares in the ticket, merchandise and sponsor revenue). I ran the Chapter information table and signed up two more new members during the event.

And that finds us still trying to digest all the great Thanksgiving meals, trying to balance our checkbooks after the Black Friday/Cyber Monday sales and getting the snow plow in condition to handle the storm moving in tonight.

While I have had a real dry spell manipulating the controls of a physical airplane, I have been very aviation-active.

I will provide more frequent updates here whether I fly or not. I will also be publishing on our EAA Chapter website and am making a renewed effort to publish more frequently on my website design business website.

It is possible that I am spreading myself a bit thin but with a concerted effort at time management everything ought to work out.