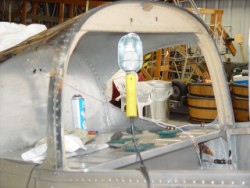 Last week I finally completed the stripping process. That cleared the way to rivet in a doubler for the new antenna and to install a flush patch in the place of an ugly scab patch that had been installed on the top of the fuselage. 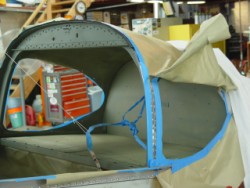 I finished that two days before I was to leave on my next trip, then spent the next day doing a final cleaning and masking in preparation for the new paint. I chose a medium gray acrylic enamel for the project. First I sprayed on a self-etching primer, then followed with two light and one medium color coat. The blue lines you see dangling in the cockpit are the loop of the elevator trim cable and the power lines for the electric trim motor which is now sitting in the bottom of the cockpit. They are masked off with blue painter’s tape.

The painting directions said to wait seven days for the paint to cure before adding additional coats. That happens to be just the amount of time that my airline trip is taking, so when I get back I’ll evaluate whether the job requires any additional painting. If the paint coverage still looks good, I’ll remove the masking reinstall the trim and shoulder harnesses. Then I’ll get some new window material, make some aluminum frames for the inside of the window, paint them and reinstall the windows with new frames. THEN I can get back to the antenna, cable and radio installation.

Remember, when you estimate the time it will take to complete a project on an airplane, make your best guess then double it and go to the next higher unit. A one-week project will probably take you two months, if you’re lucky.