I am writing these maintenance articles to make it a little easier for individuals to rebuild the Swift hydraulic components. This is NOT intended to be comprehensive or step-by-step advice about how the rebuild of these components should be completed. In order to accomplish this work you must hold either an A&P or AI certificate or you must be supervised by an individual who does and you must have in your possession the manuals and tools necessary to accomplish the task. I do not discuss all of the steps shown in the hydraulic manual. This is not considered to be preventative maintenance. 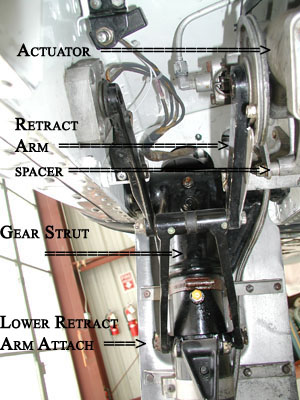 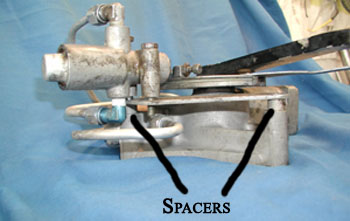 There are two hydraulic lines attached to the actuator assembly which connect to fittings on the inboard side of the strut portion of the landing gear well. These will have to be disconnected and capped. 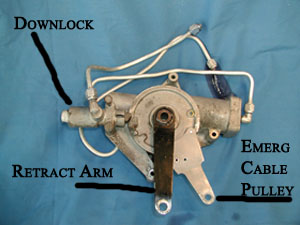 The Retract Arm is bolted through the open hole at the bottom of the photo to the respective arm on the landing gear leg (visible in the first photo) and does the work of retracting and extending the landing gear, rotating clockwise or counter-clockwise as necessary. The Emergency Cable Pully is the attach point for the emergency landing gear extension cable and is bolted to the retract arm and landing gear leg through that same open hole. It provides a manual means of rotating the retract arm using a crank in the cockpit in the event of loss of hydraulic fluid or hydraulic pump failure. 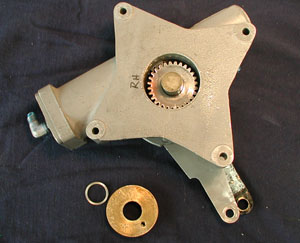 The Swift Hydraulic Manual starts out the dismantling process by removing the two clips found on the rear of the actuator to allow removal of the rear seals attached to the round brass plug shown at the bottom of this photo. Be very careful in this seal removal process. The procedure uses compressed air to blow the seal out of the back of the housing. Pay particular attention to the position of the retract arm before you apply the air pressure. If the arm is in the wrong position (not against the appropriate stop), the air pressure will drive the internal piston to the stop, whipping the retract arm around as it does. BIG potential for injury there!

Once the rear seal is removed, the internal gears become visible. The round gear shown here is held onto the retract arm shaft with a key that we will see in a following photo. The gear is removed by slamming the housing down on a flat surface as described in the manual. However, a prudent dismantler will first mark the round gear and the piston’s flat gear, which the round one engages, in a way that indicates the relative position of the meshing of the two gears.  If the actuator is reassembled with the gears not in the proper alignment, the landing gear may not retract all the way into the wheelwell, or may not extend completely to the locked position. One tooth off in the meshed position can make a big difference. 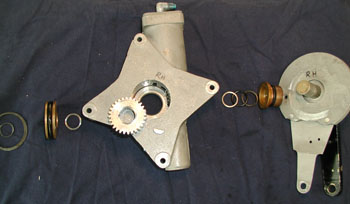 This is a photo of most of the parts of the actuator. It links to a large version so you can get a better look.  You can see the gear keyway and key which holds the gear in position on the actuator arm shaft.

The upper end of the actuator housing (with the hydraulic fitting) has four slotted screws that will have to be removed to access the piston inside the housing. The piston has an o-ring to be replaced and the housing end-cap has a seal to be replaced. Remember to coat everything with hydraulic fluid or o-ring lubricant before reassembling to prevent damage to the seals as they slip into the housing.  The photo is a little misleading in it’s arrangement. The brass piece to the right side of the photo that has several o-rings,  is actually inserted onto the actuator arm shaft from the inside of the housing and sits below the round gear.

One thing I noticed about the set of actuators on this aircraft that was different from my other aircraft was the absence of safety wire on the emergency gear extension cable pulley. The Swift Operations Manual discusses this as an added safety factor in preventing the cable from coming off of the pulley and jamming the actuator arm rotation. The process involves drilling .032″ holes in the cable pulley and then filing .032″ grooves in the edge of the pulley so that the safety wire doesn’t interfere with the pulley rotation. Proper lubrication and preventative maintenance performed on the emergency system should make this an unnecessary step, but you can never be too careful. The last thing you want is for the gear to not extend because it is fouled on the emergency extension cable.

The last post on this subject will cover the removal, rebuild and installation of the Adel landing gear strut.